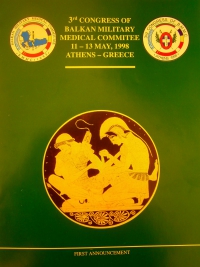 3rd BMMC Congress was held in Athens, Greece, from 11 to 13 May 1998. Nine hundred and eleven (911) specialists participated from the four member countries of BMMC. There were two hundred (200) from Bulgaria, five hundred and five (505) from Greece, forty eight (48) from Romania and fifty eight (58) from Turkey. Also, officers from military medical services of other twenty two (22) countries, other than BMMC member countries, took part in the congress. A number of five hundred and forty eight (548) scientific papers from all medical specialties were presented.
The possibility of establishment a Joint Medical Unit was discussed after the congress, during the 6th BMMC Meeting, following Greek National Board’s proposal. At that meeting, it was decided the number of participants for next congresses to be forty (40) medical officers from each country, plus the members of National Boards, Honorary Guests and accompanying persons.