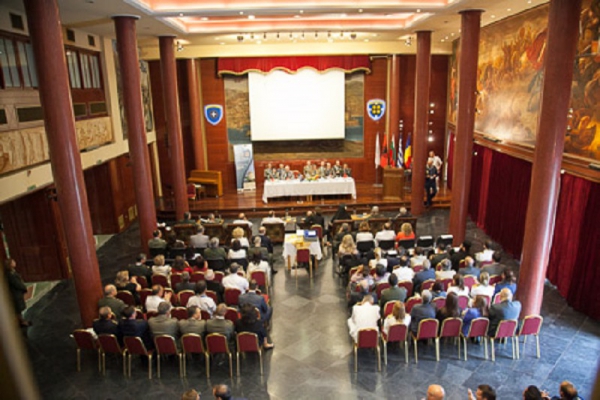 20th BMMC Congress was held in Thessaloniki, Greece between 08 and 11 June 2015. The main topic of the congress was: “20 years of BMMC. Past, Present, Future”.
One hundred and ninety four (194) participants from six member countries participated. In particular there were eleven (11) participants from Albania, thirty four (34) from Bulgaria, fifty two (52) from Greece, fourteen (14) from Romania, thirty (30) from Serbia and forty two (42) from Turkey. Furthermore, there were eleven (11) observers, six American military doctors from 30th Medical Brigade/Germany, two from USA, one from Belgium and two from Netherlands, which attended the Congress. A total number of three hundred and forty eight (348) scientific papers from the six member countries of BMMC (Albania, Bulgaria, Greece, Romania, Serbia and Turkey), one hundred and seventy two (172) oral and one hundred and seventy six (176) poster presentations were presented.

Greek National Board hosted the 5th Annual Meeting of the Chiefs of Military Medical Services of BMMC countries. The main topic of the meeting was “Periodical Preventive Health Examination of the Military Personnel”. The 5th BMMC Student Meeting was held in the framework of the Congress on the 9th of June. Three (3) medical students from Greece, two (2) from Romania, two (2) from Turkey and one (1) from Serbia attended the BMMC Student Meeting with eight (8) presentations.

Two round tables took place: «Causes of secondary hypertension in young age groups of Armed Forces» and «The main zoonotic diseases, threat to public health».
A Hyper-realistic simulation workshop took place during the Congress. The attendance of the workshop allowed participants to make use of different skills for treatment of Massive Bleeding, Airway Injuries, Thoracic Injuries etc. Greek National Board presented the history of BMMC via a video. This practice was highly appreciated and encouraged to be continued.